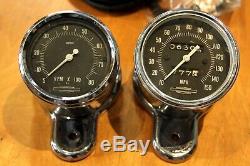 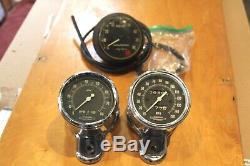 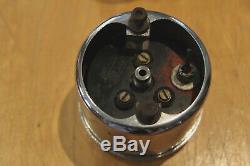 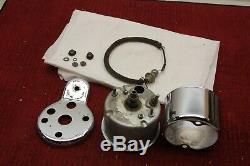 Here we have some sportster gauges first used in 1967. 150 mph speedo and matching tachometer.

Here is the story as I know it. In 1966 or 1967 Harley took a Sportster and some factory technicians to the salt flats to see how fast it would go.

It was a "stock" bike very carefully tuned by the factory guys. When they ran it the top speed was just over 150 MPH. This was a Harley record not a Land Speed Record. However Harley was very excited. So to celebrate, they changed the production Sportster speedometer from a max speed of 120 mph to 150 MPH to commemorate this event.

There were many others to follow. In 1970 they changed the speedometer completely. There were other different "Bar and Shield" speedos used on later bikes. Not the same as this one. This is a relatively rare speedometer.

That's what they all say. This one has only been used for 6300 miles, relatively low. It can be used on many different years as you well know. Also included are a few related parts. These were used on all models (XLH or XLCH) but the mount was different as per bike model. This speedo is from an XLCH, but is the same as the XLH. Also included is a XLCH only? I think it is correct for 1967-69. Sorry but I don't know the differences. Also the correct light socket and wire is included. The trip reset shaft is there but the small plastic knob is not. Also included is a matching 8000 rpm tach. Let's add one more part. Not really correct for 1967 but makes a great way to mount a speedo or tach.

Harley mounting bracket 67175-65 for the Speedometer or tachometer on a Sportster (parts book says 1965-66) they would attach to the top fork nut. I guess it was a cap nut that had a threaded hole in the center. Harleys' part number is 45756-65 fork tube cap w/valve.